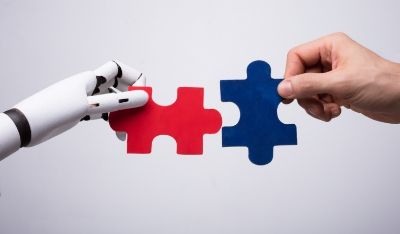 Collaborative Robotics (cobots) have proved themselves to be useful in manufacturing. With such systems, the multi-sensory cognitive skills of the human operator are tapped to complement the tirelessness, repeatability, and accuracy of a conventional robot.

The aim of this project is to develop a class of cobots to serve as virtual guides to human operators performing manufacturing operations, such as painting and gluing. In such operations, the virtual guide ensures that the operator, who performs the physical motion, does not deviate from this path. The path and its parameters are programmed in the cobot and the human-caused deviations are indicated to the operator through force-feedback using a haptic interface, while simultaneously also directing the operator to move along the planned path.

Alternative Propulsion Systems: In underwater robotic applications or those where a robot has operate while immersed in a fluid, there is a need to find alternative propulsion systems, as conventional systems present the so-called problem of fouling of the environment. In this project, an ultrasound based propulsion system is proposed as one such solution. Ultrasound principles have been used to move kidney stones in the human body and hence, the ability to use acoustic energy as a source of mechanical energy has been successfully demonstrated. An array of transmitters and receivers, placed in situ or otherwise, is proposed to generate the ultrasonic signals as well as act as a feedback mechanism for odometry as well as to detect obstacles in the path of the robot.